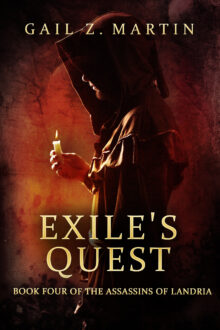 Buddy flick epic fantasy! The fourth in the Assassins of Landria series from the award-winning, bestselling author of Scourge: A Novel of Darkhurst and The Chronicles of The Necromancer.

A vacant throne. A dark mystic intent on the crown. Two fugitive assassins risking everything to save the kingdom that exiled them.

Rule-breaking, unconventional assassins Joel “Ridge” Breckenridge and Garrett “Rett” Kennar are caught between dangerous allies and deadly enemies as the future of Landria hangs in the balance. The council of regents controlled by the Witch Lord threatens the succession after King Kristoph’s murder. Rett escaped his brutal captors scarred in body and mind. Now he’s struggling to control the untested powers unleashed by his ordeal and dream walks to a hidden cloister full of forbidden magic. Falsely accused of treason, Ridge hunts the mage who damaged Rett and uncovers a terrifying new threat.

Can a desperate gamble by outlaws and exiles avenge the king and save the crown?

Coming soon in print and audio.