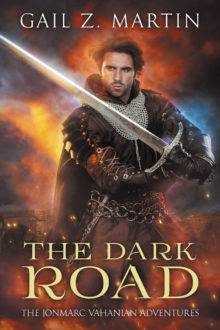 “May you lose all you love to the flame and the sword—and the Dark Lady take your soul!”

Jonmarc Vahanian fled from the raiders and monsters that killed his family, but when danger dogs his steps once again, he leaves the traveling caravan that gave him shelter to become a mercenary in nearby Principality. His fighting skills help him rise through the ranks, and draw the attention of a Nargi general—and the general’s undead mage. An old, unsettled score turns deadly, trapping Jonmarc in dangerous intrigue. He can save himself—and betray everything he holds dear—or die a hero as the raider’s curse holds true.

This collection is the second set of short stories and novellas that reveal another phase of Jonmarc’s growth from a blacksmith’s son to becoming one of the greatest warriors in the history of the Winter Kingdoms.

Soldier. Fight slave. Smuggler. Warrior. Brigand Lord. You may have encountered Jonmarc Vahanian in the Chronicles of the Necromancer but you don’t really know him until you walk in his footsteps.