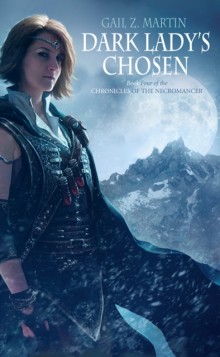 The fourth thrilling installment of Gail Z Martin’s Chronicles of the Necromancer series.

Treachery and blood magic threaten King Martris Drayke’s hold on the throne he risked everything to win.  As the battle against a traitor lord comes to its final days, war, plague and betrayal bring Margolan to the brink of destruction. The price to save his kingdom may be the lives of those he loves most—and his soul.  Civil war looms in Isencroft, and Cam of Cairnrach may be the only hope to put down a rebellion that threatens the crown. In the Margolan palace, betrayal threatens the new queen and the unborn heir to the throne. Alone in a new kingdom, Queen Kiara is charged with treason and becomes an assassin’s target. And in Dark Haven, the undead threaten the Truce with the living, leading to deadly conflict. Lord Jonmarc Vahanian has bargained his soul for vengeance as he leads the vayash moru against a dangerous rogue who would usher in a future drenched in blood.

Note: Due to changes with the publisher, the ebook version of Dark Lady’s Chosen is temporarily unavailable. It will be returning under the SOL Publishing imprint soon.

What gave you the idea for Dark Lady’s Chosen?

So many stories just end when the good guy wins, as if that fixes everything.  In real life, assuming you can tell who the good guys are and whether or not they’ve actually won, there is usually a total mess to clean up and things never go back to the way they were.  After every war in history, there was a period of re-making and anarchy until the powers that survived sort things out.  That’s the inspiration for Dark Lady’s Chosen.

***Spoiler here for The Blood King***At the end of The Blood King, Tris defeated Jared and took the throne.  But given all of Jared’s willful destruction and also how much governance he ignored, the kingdom is in dire straits.  And like most things, it takes less time to break something than to make it again.  So even one year of driving off or killing the farmers, burning the crops, displacing the trades people, looting the treasure is going to take a while to un-do, and some of it will never be the same.  It’s that in-between time that fascinates me, when the energies of creation and chaos are sorting themselves out.  That’s what’s going on in Dark Lady’s Chosen.

Your books seem to be getting darker.  Is that intentional?

Not from the sense of saying, “Gee, I need to make my books darker.”  It’s a natural progression of where the events in the story are going.

How have your characters changed as the series has gone on?

In The Summoner, Tris is a 19 year old young man who may not have a perfect home life, but he comes from a well-to-do family and really hasn’t had to worry about anything serious (aside from staying out of Jared’s way).  That’s true for Kiara as well.  Cam and Carina have had a rougher time, but the last few years have been better for them.  Carroway and Soterius had a comfortable life at the palace.  And while Jonmarc is usually in danger, it’s at a level he’s learned to tolerate as “normal.”

Everything that happens in The Summoner and The Blood King upends all of their worlds.  And as they step into their new roles and responsibilities, it changes them.  They are also living in perilous times.  There are still a lot of challenges to be overcome before “normal” is good again.  They are going to have to change to meet those challenges, and reinvent themselves to deal with the new reality,.

Can you reveal a little about where the stories might go after Dark Lady’s Chosen?

There will be new threats.  Margolan and Isencroft are not back to full strength.  There’s famine and plague, and groups within the population are restless.  There are threats from inside the kingdoms, as well as a new threat from across the Northern Sea and something Tris hasn’t faced before….a dark Summoner.

You also do the Ghost in the Machine podcast.  How does that tie in with your books?

In the course of going to conventions and writers’ conferences I meet a lot of other authors.  I know my readers read about 200 books per year.  I’m very grateful that they read my books, but that leaves 196 other books to be read!  My podcast may introduce them to other books and authors they hadn’t discovered yet, and that’s good for everyone.

It’s been a busy year for you with conventions—Why is attending conventions so important to you?

Conventions are really the lifeblood of fandom.  I used to enjoy attending conventions before I became a writer, and now it’s even more fun.  It’s where I get to meet other authors and also get to connect with readers.  I hear the buzz that’s going on and I get to discover new things.  There’s always something new.  I love it.

How is the siege going at Lochlanimar?

Not well.  Winter is the often the season of choice for sieges because it doesn’t take men away from farming or the harvest, but it’s a miserable time to be in the field.  The magic is very unstable.  And it’s true; there is a fever in the camp, sent by Curane’s mages.  I pray to the Lady that we can finish this and go home.

You haven’t been king for a full year yet and already Margolan is at war.  What are your thoughts about that?

I would certainly have wished for a more peaceful transition….and for my father to have lived another twenty or thirty years.  But that didn’t happen.  I hope that there will be peace once Curane and his traitors are defeated.  We can’t ever recreate what was, but maybe we can build a new future.  I hope so.

When your heir is born, the crowns of Margolan and Isencroft will be joined, at least for a generation or two.  That’s caused some problems in Isencroft.  Do you favor the idea of a joint kingdom?

It’s not a question of favoring the idea.  When my father and King Donelan of Isencroft came up with the idea of the betrothal contract, it was to prevent a war.  At the time, I’m sure Donelan thought they would have more than one child.  When we deposed Jared, the original contract was nullified, but by that time, Kiara and I were in love.  Isencroft was also in very bad shape from a couple of bad harvests.  Donelan’s done the best he could, but luck’s been against him.

Our hope is that Kiara’s father will live a long and healthy life and that by the time the succession issue really has to be dealt with, we will have more than one child of age to assume the throne so that the throne really isn’t consolidated.  I’m sure that would make the people of Isencroft happy, and truth be told, it would probably make some people in Margolan happier also.

Your magic has become much more powerful.  Has it changed you?

It’s hard to explain if you haven’t felt the magic.  It’s like being able to see a whole new range of colors or a world that’s hidden to everyone else.  Magic reveals a side of nature that is expanded and amazing.  But dark magic has terrors of its own.  People without magic sleep better not knowing about any of this.  I don’t have a choice about seeing it.

I’ve been lucky enough to have had some good teachers, even though my training was rushed and most of what I’ve learned has been “on the job” so to speak.  There hasn’t been time for a lot of theory.  But yes, I think the magic has changed me, both the wondrous things and the terrifying things.

Most people fear death because they can’t see across to the other side.  They wonder if there is another side.  I don’t wonder.  I know that there is something else, even though I haven’t exactly seen it.  And I know that for most people, there is peace and rest.  For some, people like Jared and Curane and the ones who hurt others without conscience, there is restitution.  I used to wonder if the Lady really existed.  I don’t wonder anymore.  But at the same time, I have more questions now than I ever had.  So yes, the magic has changed me.

Despite the reforms you’ve put in place, Margolan is still having a great deal of difficulty.  Do you foresee a return to the prosperity the kingdom enjoyed under King Bricen?

By the Whore, I hope so!  Unfortunately, it won’t be soon.  Jared managed to do an incredible amount of damage in a short time.  It’s easy to destroy something, and so hard to rebuild it.  There’s been only one planting and harvest since I took the throne, and many of the farmers and workers hadn’t returned yet from where they fled to get away from Jared.  Maybe they never will.  Until the farms are working again, people will be hungry.  We’ve done what we can to help, but it wasn’t enough.

Now, there’s likely to be plague.  We’ve lost men in the war.  The people who fled when Jared had the throne haven’t come back, and they won’t return until things get better here.  So in the meantime, our army is short on men and our fields are short of workers.  It’s going to take years to rebuild, and that’s assuming that Nargi and Trevath don’t decide to attack.

I want to restore Margolan to what it was like when father ruled.  But it won’t be easy and it won’t happen quickly.  Whether or not the people will have patience….we’ll see.

Now that the Truce has been broken in Dark Haven, can mortals and vayash moru coexist peacefully?

Most mortals and vayash moru want peace.  There are just a handful of rogues on both sides stirring up trouble.  That’s why we have to end this nonsense.  Now.

You’re mobilizing an army against Malesh.  Are you out for justice—or revenge?

Malesh slaughtered an entire village of mortals.  He’s threatened to kill more.  I took an oath to King Staden to protect all of Dark Haven’s residents—living and undead.  If we can’t contain this, it’s the king’s right to bring in an army to stop Malesh.  It will get really ugly if that happens.  Best to put an end to this while it’s still a “family” matter.

Justice or revenge?  I don’t know and I don’t care.  I just want to bring that bastard down and make him pay.

What will happen in Dark Haven if the Truce is set aside?

If the Truce ends, the king’s army will occupy Dark Haven until peace is restored.  And if they can’t bring peace, it’ll be like it was before the Truce, when mortals and vayash moru and vyrkin lived in fear and killed for reprisal.  Gabriel’s told me about those times.  I have no desire to see them return.

You’re having a rough first year as Lord of Dark Haven.  Any regrets about taking the title?

None.  I was probably fated to have some bloody bastard trying to kill me, no matter where I was.  Just my luck, I guess.  Before Malesh started playing games, we were making progress restoring Dark Haven and its lands.  I’m proud of what we accomplished.  There just wasn’t enough time….for any of us.

There’s a rumor that King Donelan threatened to place a huge bounty on your head if anything happened to Carina while she was under your protection.  In light of recent events, does that worry you?

Only if I live through the battle.