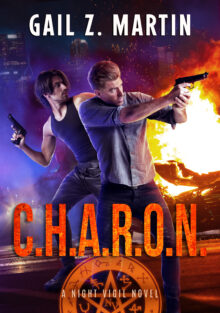 Your best hope to make it through the hour of the wolf.

Ex-priest Travis Dominick and former FBI agent Brent Lawson hunt demons, monsters, and supernatural troublemakers. When Brent gets a call for help from an old army buddy, he and Travis head to a small central Pennsylvania town beset by a series of unexplainable deaths and escalating paranormal activity. The murders mimic crimes from decades past, down to the smallest detail, and as Travis and Brent battle vengeful entities, rumors surface that shady government experiments helped make a bad situation even worse.

Torrential rain and rising rivers mean there’s no escaping the creatures hunting the shadows, beings that take shape from people’s deepest fears and feed on their terror. With the lives of everyone in South Fork at stake, Brent and Travis face their toughest case yet. They’ll have to confront the town’s dark secrets, the legacy of a covert supernatural psi-ops program, and their own painful memories to battle a bloodthirsty ancient creature and fight the deadly spirits that roam the night.