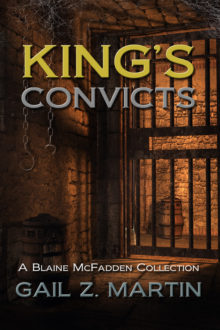 Includes: Arctic Prison, Ice Bound & Cold Fury.  When Blaine McFadden killed the man who dishonored his sister, King Merrill exiled him to Velant Prison on far-away Edgeland, an arctic penal colony known for its brutality.  If the icy cold and the hard labor doesn’t kill them, the prison’s sadistic commandant just might. But Blaine and his convict friends didn’t come this far to die easily, and they have no intention of going down without a fight.

The King’s Convicts and the upcoming King’s Exiles fill the six-year gap at the beginning of Ice Forged, the first novel in Gail Z. Martin’s Ascendant Kingdoms epic fantasy series.