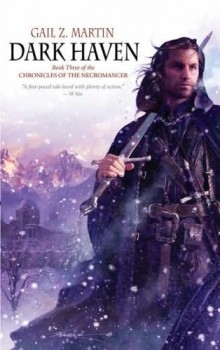 Chronicles of the Necromancer Book Three

Martris Drayke fought the Usurper and defeated both the blood mage Arontala and the spirit of the Obsidian King.

As the newly-crowned King of Margolan, Tris must rebuild a kingdom shattered by betrayal and bloodshed. Some of the Usurper’s loyalists evaded capture and remain a danger. Famine and hardship threaten to bring more chaos and divisions. And in his Court of Spirits, the necromancer-king is overwhelmed by the ghosts seeking retribution and release.

With their royal wedding just weeks away, Tris and Kiara Sharsequin, heir to the throne of Isencroft, will unite the rule and succession of two allied kingdoms. Not everyone is pleased to see that happen. As threats multiply, Tris and Kiara must guard against traitors and enemies both inside and outside the castle, determined to destroy them and everything they fought to gain.

Meanwhile, former smuggler and mercenary Jonmarc Vahanian, the new Lord of Dark Haven, finds himself at the center of a power struggle among the undead vayash moru. As he untangles a web of deception, Jonmarc realizes that the conflict in Dark Haven threatens not only the future of the Winter Kingdoms but also the fate of the living, dead and undead.

An interview with Gail Z. Martin on Dark Haven: Book Three in The Chronicles of the Necromancer.

Q.  You finished up Tris Drayke’s quest for the crown in The Blood King.  Where do you take the story for Tris in Dark Haven?

A.  Once Tris wins back the throne and destroys the Obsidian King, he realizes that the hard work is just starting.  Although Jared the Usurper held the throne for less than a year, his reign took a terrible toll on Margolan.  Jared’s iron-fisted rule displaced so many farmers and burned so many of the crops in retaliation that the country is in danger of famine.  But the greatest danger is Lord Curane, a powerful nobleman who supported Jared.  Curane has retreated to his fortified holdings along with the blood mages and traitorous generals who supported Jared.  War is inevitable, and Tris knows that Nargi and Trevath will be watching for an opportunity to invade should the battle go badly for him.

Q.  The title of the book would suggest that Jonmarc Vahanian plays a major role.

A.  Absolutely.  Jonmarc’s even on the cover this time!  Once he healed up after the Battle of Shekerishet, Jonmarc headed to Dark Haven. He and Gabriel have made tremendous progress repairing the damaged manor house and getting the holding to be self-sustaining after ten years of being abandoned.  He hopes to convince Carina to marry him.  But despite making a good start of things, there’s a faction among the vayash moru who aren’t happy to see a mortal lord return to Dark Haven—and who intend to take matters into their own hands.

Q.  You’ve promised that we’ll see more of some of the characters who played secondary roles in The Summoner and The Blood King.

A.  Oh, yeah!  Carroway plays a big role, as does Cam.  We even find out Carroway’s first name (he hates it).  And Kiara and Carina both have major plot threads.  The Blood Council—Gabriel, Riqua, Rafe, Astasia and Uri—all are at the forefront.

Q.  You’ve hinted that Dark Haven is indeed somewhat darker than the first two books.  Can you tell us more?

A.  I’ve always been intrigued by the events in history that seem to push over the whole house of cards.  Sometimes, the event itself seems fairly localized—like the assassination of Archduke Ferdinand that began World War I.  But afterwards, everything changes.  In The Summoner and The Blood King, Tris and Jonmarc have a very tight focus—it’s all about unseating Jared, stopping the Obsidian King and putting Tris back on the throne.  They really can’t afford to think beyond that.  In Dark Haven, the extent of the damage and the ramifications—begin to sink in.  Jared’s reign set forces in motion that destabilize the whole area.  Tris and his friends are only just beginning to realize that nothing will ever be the same as it once was—and it could get much worse.

Q.  Here’s what everybody wants to know—will we see more of the vayash moru?

A.  Yes.  With so much of the action set in Dark Haven, the book really provides much more of an intimate look at the interrelationships among the vayash moru and mortals, as well as the tensions and feuds between factions on the Blood Council itself.  That’s been a lot of fun to write, since the Blood Council all have such strong personalities.  And then there are the double crosses and betrayals that set the story in motion…

Q.  As an author, you’ve been pretty visible in the last year.  How do you write and keep up with all the conventions, blogging, signings and other activities?

A.  I don’t sleep.  It has really been a great year.  I’ve had a marvelous excuse to attend a lot of cons, since I’m a guest author!  Cons are really the lifeblood of fandom, and although I had been a regular years ago before I got busy with family and a day job, it’s wonderful to be back on a frequent basis.  Since I’m an extrovert, I love getting to talk with readers at signings and conventions and talk shop with other authors.  The videoblogging is new—I just started that at RavenCon, but it seemed like a great way to take folks with me to experience the convention if they didn’t go, or remember it if they did attend.  The problem is, attending cons really only lets me connect with U.S. readers—and mostly in the SouthEast.  That’s a problem, because so many readers are in the UK, Europe, Canada, Australia and elsewhere in the States. So now in addition to my MySpace page, I’m also on Squidoo and Facebook—plus I’ve expanded my pages on Book Marketing.ning.com, Shelfari, Broad Universe and BookTours.com.  Broad Universe has been a great organization that I’ve just gotten to know in the last year—it focuses on women who love SF/F.  I love to connect with readers so if you’re a member of any of these groups—please friend me!

Q.    You’re now several months into your reign.  Is being king what you expected?

A.  I never wanted the crown.  I was just the only one who could unseat Jared without throwing Margolan into anarchy.  So here I am.  And the anarchy seems determined to come anyhow.  I saw the toll the crown took on my father, even before it cost him his life.  I had no illusions.

Q  Is there truth to the rumor that Jared had a bastard son?

A.  Apparently so.  Knowing my half-brother, perhaps it’s more surprising that he doesn’t have an entire village of them.

Q.  How goes the clean-up after the battle to win the throne?

A.  Jared managed to make a huge mess in less than a year.  The fields he didn’t burn were deserted when the farmers fled to save their lives.  Our best guess is that one-third of the villagers were displaced.  Some still haven’t come home.  Maybe they never will.  Trade has ground to a stop—and winter’s coming on.  Despite our best efforts to barter grain from Dhasson and Principality, people are likely to be hungry this winter.  When people are hungry, their loyalty belongs to the person who promises to feed them.  It’s not over yet.

Q.  What about the reports that there have been exorcisms—and executions?

A.  Jared and Arontala killed a lot of people.  Before Shekerishet is livable again, I have to send those ghosts to their rest.  That’s true out in the countryside as well.  Mass graves.  It’s even worse than we thought.  But….Margolense are a strong, proud people.  We’ll rebuild.  As for the executions—General Soterius and his army have been rounding up Jared’s traitors, the ones responsible for the killing and looting.  That is, the ones who haven’t already been killed by the refugees or the ghosts.  There have been trials, and the ghosts of the victims have been willing to come forward and identify the ones who killed them.  And there have been hangings.  Jared’s men have paid for what they did.

Q.  All this while you’re getting ready for a royal wedding.

A.  That’s the one bright spot.  Things aren’t as stable as I’d like them to be, but security will be high.  And knowing how it is for so many of the people in the countryside, I’ve asked Carroway to be thrifty planning the wedding.  But it’s a reason to hope for the future.  We need that.  I need that.

Q.  And the rumor that you’ll be going to war before winter?

A.  Lord Curane has holed up with Jared’s surviving generals and blood mages in his fortification at Lochlanimar.  We can’t let them regroup.  There will be war.

Q.  Does this raise the pressure to produce an heir?

A.  Please.  I’m not even married yet.  You can’t believe how tired I am of the phrase “secure the succession.”  Normal people just look forward to having a child together.  Heirs and successions are another reason I never wanted the throne.  Yes.  With Curane’s rebellion and the rumor of Jared’s bastard—and the new joint kingdom with Isencroft, it raises the stakes.  But I’m not going to let the pressure make something so personal become an item on Zachar’s agenda.

Q.  We’ve heard that some in Isencroft aren’t too happy about marrying their princess to an outland king….or creating a joint kingdom.

A.  Bricen and Donelan created the betrothal contract to avoid war many years ago.  Isencroft’s years of poor harvests and famine made the joint kingdom inevitable.  There are divisionists in Isencroft who are so wrapped up in their pride that they don’t care how many people starve.  So yes.  Donelan has his hands full right now, and the divisionists are making it worse. Isencroft doesn’t have the resources to sustain an army right now if the Western Raiders decided to attack.  They’re vulnerable.  The damndest thing is, because of Jared, Margolan isn’t much better off right now.  Trevath is probably eying both kingdoms.  They’ll be watching how the battle goes with Curane.  We can’t afford to lose.

A.     I never wanted the crown.  I was just the only one who could unseat Jared.