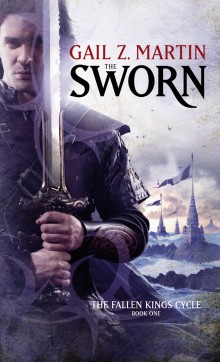 Summoner-King Martris Drayke must attempt to meet this great threat, gathering an army from a country ravaged by civil war. Tris seeks new allies from among the living – and the dead – as an untested generation of rulers face their first battle. Meanwhile, the legendary Dread are stirring in their burrows after millennia of silence and no one knows what hand wakes them and whom they will serve when they rise.

Now, Drayke turns to the Sworn, a nomadic clan of warriors bound to protect the Dread. But even the mighty Sworn do not know what will happen when the Dread awake. All are certain, though, that war is coming to the Winter Kingdoms.

THE SWORN is the beginning of a new adventure set in the world of The Chronicles of the Necromancer.