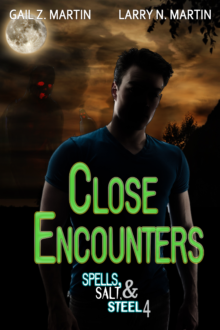 There’s a drunk werewolf passed out on his porch, a monster mistaken for a mammoth stalking the nearby woods, zombies at an abandoned sanitarium, and his niece has been kidnapped by a haunted hotel that makes the Overlook resemble the Waldorf Astoria.
For Mark Wojcik, it’s just another week in the wild backwoods of Pennsylvania.

That’s right, Mark Wojcik is back, with more monsters, more one-liners, more action, more mysteries, and now with added shady government conspiracies! This time old family ghosts come calling when his dead brother’s widow calls to tell him his niece has gone missing, Mark knows she’d rather cut off her arm than ever speak to him again, so if his sister-in-law is calling, it’s gotta be serious. Mark finds out just how serious when he realizes that his niece has vanished into a haunted hotel that only appears once every few decades, so if he’s going to get her home safe, he’d better haul some serious ass!

Can Mark save his niece when he couldn’t save his brother?