Are you ready for summer reading? I’ve got some suggestions for you! 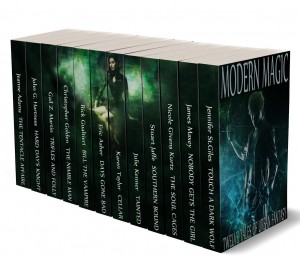 First of all, check out Modern Magic: Twelve Tales of Urban Fantasy, an ebook boxed set exclusively on Kindle for a limited time. I’m talking about 12 book-length works by authors (including me) who know their way around the dark side, who can put a shiver down your spine and who dream up stories to give you nightmares. It’s a walk on the wild side, into the shadows, where things go bump in the night and the hour of the wolf never ends.

You don’t even have to sell your soul to get this deal. Just $1.99 only on Kindle, only for a limited time, https://amzn.com/B01FNF8DHS

It’s the ONLY place to find Trifles and Folly, the first-ever collection of the initial 10 Deadly Curiosities Adventures stories with Cassidy, Teag and Sorren, all in one volume!

DAYS GONE BAD (Vesik, Book 1) by Eric Asher – An urban fantasy about a necromancer and his vampire sister. And chimichangas.

THE NIMBLE MAN by New York Times bestselling author and Stoker Award winner Christopher Golden, first book of The Menagerie series. They are beings of myth and legend. They 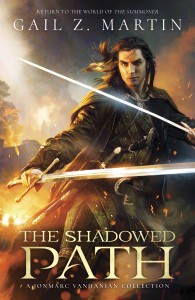 possess powers beyond imagining. They are our only hope.

BILL THE VAMPIRE (The Tome of Bill, part 1) by Amazon Top 100 author Rick Gualtieri – Bill Ryder was a dateless geek, but then he met a girl to die for. So he did.

HARD DAY’S KNIGHT – by award-winning author John Hartness– A pair of comic book nerds get turned into vampires, and now they have to save the world. The world is so screwed.

SOUTHERN BOUND (Max Porter, Book 1) by Top 100 Kindle author Stuart Jaffe – When Max Porter discovers his office is haunted by the ghost of a 1940s detective, he does the smartest thing possible — starts a detective agency.

THE SOUL CAGES: A Minister Knight Novel by Nicole Givens Kurtz -Sarah risks everything to save her soul and be reincarnated back into flesh. Now, the real adventure begins…

TRIFLES AND FOLLY (Deadly Curiosities Adventures) by #1 Kindle Top 100 bestselling author Gail Z. Martin – A Charleston, SC antique store is the cover for a coalition of mortals and immortals who have sworn their lives and magic to saving the world from supernatural threats and cursed relics.

NOBODY GETS THE GIRL by 2016 Piedmont Laureate and award-winning author James Maxey — The fate of the free world is at stake as the superhuman battles escalate, wiping entire cities from the map, threatening the survival of all mankind. Who can save us from the looming apocalypse? Nobody!

TOUCH A DARK WOLF (Shadowmen Book 1) by USA Today bestselling author Jennifer St. Giles–Poisoned by evil, Jared fights to save Erin before the murderous darkness in him claims them both .

CELLAR by Bram Stoker Award-nominated author Karen E. Taylor– If Laura Wagner’s inner demons don’t get her, the real ones just might…

So load up on your beach reading in one easy ebook boxed set for less than the price of a cup of coffee! Pre-order now and be first in line when it goes live June 2!

Now if you still like a good bedtime story, check out Gaslight and Grimm, a collection of Steampunk fairy tales including one by Larry and me, The Patented Troll, which is our clockwork retelling of the story of the Three Billy Goats Gruff. With tales by James Chambers, Christine Norris, Bernie Mojzes, Danny Birt, Jean Marie Ward, Jeff Young, Gail Z. and Larry N. Martin, Elaine Corvidae, David Lee Summers, Kelly A. Harmon, Jonah Knight, Diana Bastine, and Jody Lynn Nye. Order here: https://amzn.com/B01E6C03OA 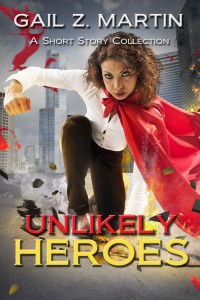 Ready for some Unlikely Heroes? If you’ve heard me read from the story about the lady in the parking lot having a really bad day, this is for you. The Breaking Point, A mother has one of the worst days ever as everything seems to go against her until she finally snaps and takes charge. In Windows on the Soul you meet an unusual superhero, they call her in when they want to minimize collateral damage. She’s not showy and won’t be on the evening news but she’s the one the other superheroes fear and avoid. Finally you meet Old Nonna, part legend, part myth, no one likes to speak of Old Nonna out loud but they know she’s there – waiting for those who need to find her. Grab it here: https://amzn.com/B01G47SXNS

And coming June 14, the first new book in the world of The Summoner (Chronicles of the Necromancer), The Shadowed Path—a collection of the first 10 Jonmarc Vahanian Adventures short stories PLUS an exclusive 11th story you can ONLY find in this collection. The Shadowed Path will be available in PRINT as well as ebook, so for everyone who’s been asking for dead-tree edition Jonmarc stories, here it is! Pre-order here: https://amzn.com/B01EBDMX38

How do you like to connect with authors at conventions? Answer my May survey and let me know! Plus, you’ll be entered for a chance to win 4 ebook short stories! http://survey.constantcontact.com/survey/a07ecn04bwwinsz8049/start

And don’t forget to catch up with Gaslight and Grimm authors David Lee Summers and JeanMarie Ward on my DisquietingVisions.com blog, and with more authors on the ESpecBooks.com blog!

I’ll be at a bunch of summer conventions, and holding launch parties at many of them. Watch for a Modern Magic/The Shadowed Path room party at Balticon on Saturday night, plus I’ll be part of the Gaslight and Grimm launch party on Sunday. Larry and I will both be at ConCarolinas and Congregate, and I’ll be at Origins Gaming Fair as well. Hope to see you soon!

And don’t forget—The Shadow Alliance is my street team of awesome readers who get insider information, extra contests and giveaways and lots of fun, and help me boost the signal about new books. Come play with us—it’s free! https://www.facebook.com/groups/435812789942761/