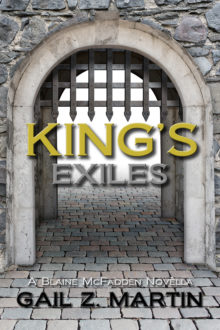 King’s Exiles is the final chapter recounting Blaine’s adventures during the missing six years in Ice Forged and follows immediately after Cold Fury or the collection, King’s Convicts.

An arctic prison and a convict colony at the end of the world await disgraced Lord Blaine “Mick” McFadden. Spared execution for murdering his abusive father, Blaine doubts that being sent to Velant Prison and the Edgeland colony is really a mercy. Not when every day is a fight to survive.

Yet amid the brutal conditions of the prison and the harsh reality of the colony, Blaine forges a new family of friends who are determined to survive, earn their Tickets of Leave, and build a new life homesteading. Until war between the kingdom of Donderath and its rival neighbor threatens to destroy both the homeland they left behind and the new lives they’ve just begun to wrest from the grip of fate.

(King’s Exiles is also included in the Collection: Convicts and Exiles.)