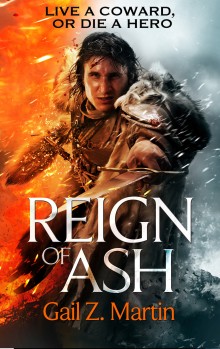 Survival is only the beginning.

Blaine McFadden endured six long years in the brutal Velant prison colony, exiled for murder.  War devastated his homeland of Donderath, and destroyed the magic on which the Ascendant Kingdoms relied.  Now, Blaine and a small group of fellow exiles have returned to a lawless wasteland, where unrestrained magic storms wreak havoc and monsters roam free.

Yet, amidst the chaos, rumors persist of a new magic that could restore the kingdoms. But the key lies within a dangerous, ancient ritual and a group of vanished survivors.  Now, McFadden’s only hope is a small, desperate, quickly rallied army. Together they must make one last stand knowing that if they fail, the civilization of the Ascendant Kingdoms dies with them.